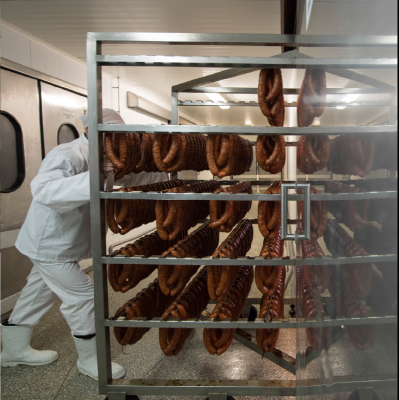 KABO meat plant was built in 1992 as a partnership founded by Anatol Borowik and Wiaczesław Karpieszuk. The company is located in Choroszcz, Podlasie region of Poland. At the beginning of its activities the company produced pates, roasts, poultry meats, smoked meats and other delicatessen products. However, over the years and due to changing tastes of customers, the prodution of pork as well as poultry and pork goods was initiated.

The company systematically invested in the development of production conditions and overall image. The effect of resilient marketing activities is a distinct brand, well recognised in the Podlasie market. At the beginning of the new century, in order to meet high market needs, the decision to build the new factory was made. The plan was fulfilled within the EU SAPARD programme. Since 2006 the production has taken place in new buildings, which have met all EU standards. The production abilities have risen to 15 tons a day and the product range has reached over 80 items.

The factory produces about 250 tons of meat goods per month. For many years the company has specialised in the production of dried meats and sausages, the best known being: Biebrzańska sausage, dried pork sausage “Krakowska”, dried turkey sausage “Krakowska”, dried sausage Bindyga.
The second group of products, which is quickly gaining new clients, are typically homemade goods: chicken with mushrooms, pressed knuckle, ham on a loop and smoked or steamed bacons. KABO produces also a whole range of traditional produce, produced without preservatives, according to the old Polish recipes.

In 2002 the plant was nominated for the 9th edition of “Agro-Poland” – the national promotion competition. In the years 2005 and 2006 the plant has received “Business Gazelles” awards, funded by “Puls Biznesu” newspaper, which was a proof of being one of the most dynamically developing companies. In 2009 Biebrzańska Sausage was the winner of “Nasze Dobre Podlaskie” (Our tasty goods from Podlasie) – the ranking of “Kurier Podlaski” (the local newspaper). KABO was awarded the brand of the year 2009 and in 2010 it received the title of “Polish producer of food 2010”.
The distribution of goods takes place in the eastern part of Poland. Products are sold to warehouses and network clients. Moreover, the company runs its shop, located next to the plant.

Products are exported to England, Ireland, Lithuania and other countries.